This  "list" of the above mentioned three countries does not demand to be complete. It is only based upon the information available to the author. On request and when further information is available further countries can be added.

Catboats in Germany in 1880

First catboats did exist in Germany already in the 80´s of the 19th century and they had been popular. In old magazines it had been reported, that some of these boat types had been around in 1880. They had been seen in the waters surrounding the city of Berlin, from Havel-river downwards all the way to Hamburg, the Spree-river upwards until the town of Teupitz and also the Oder-river downwards till the Achterwasser which separates the isle of Usedom from the Baltic sea. People had used these 5-6m long boats for short water trips. Also somewhat bigger ones in the range of  7,00m -7,50m length had been reported. Some of these boats had been equipped with an additional bowsprit. The first written documents for german built catboats are the catboat "Teufelchen" (= "little devil") from Arthur Tiller, and the 4,50m "Katkreuzer" (= catcruiser) from the well-known Abeking & Ramussen shipyard from the years between the wars. Of the A&R Katkreuzer several boats had been built, at least two of them have survived until today. They are the  "Novatus" from Theo Nieuwenhuizen and does sail today in the Netherlands and the well cared of "Krümel" from 1922 of Rasmus Braun from lake Steinhude (see picture right).

From the years between 1925 and 1969 there are no documents about the building of catboats in Germany in significant numbers. But it is likely that single units had been built based on existing plans. Only with the presentation and the realization of the "Seezunge" 1969 new interest for this type of boat had been initiated.


1969 Presentation and building of the Seezunge
Since its presentation and market introduction this catboat is being built in two sizes at Fricke & Dannhus GmbH & Co. KG. as Seezunge A being the smaller type and Seezunge B  as the bigger one. In cooperation with yacht designer Marc-Oliver von Ahlen an even bigger one with a length over all of 8,15m had been designed in 2009 and built under the project name Seezunge C and named "Pommersche Flunder". Her appearance caused some sensation because of the many hidden modern equipment and materials and at the same time her fondly designed interieur. 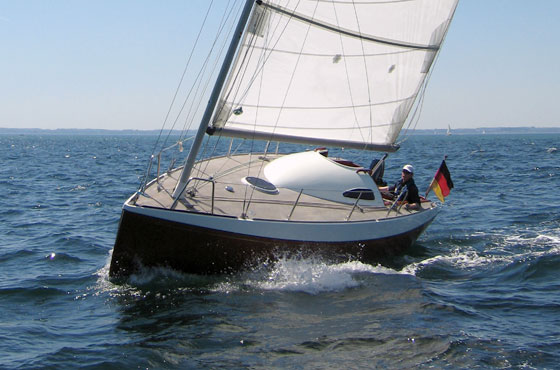 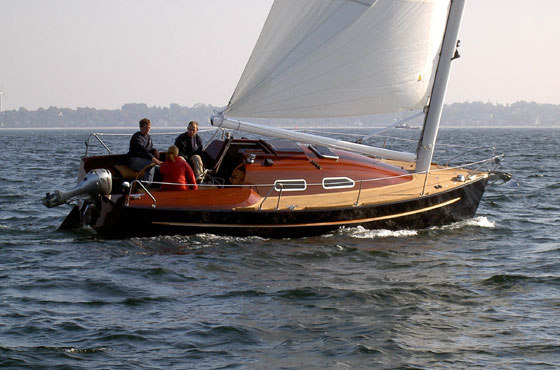 1993 designer contest of the magazine "Yacht"

The magazine "Yacht" initiated in 1993 a designer contest for the design of a small sailing cruiser to be trailered by a middle class car. From this contest some designs had been realized:

This  24,5 ft. catboat designed by Günter Ahlers, named "Molly" had been built by two brothers

In 2003 the Berlin based boatbuilder Sarfert Yachtbau presented a cat-ketch designed by Rolf Overberg, it was the Thales 22. In 2006 a larger version was designed by him but rigged as a Cat-Yawl, the type was named as


The Netherlands is a nation with a big tradition of navigators and shipbuilders. With a high sense of their people for tradition one would expect to see on the dutch shallow inshore-waters only the typical local flatbottomed boats as Tjotters, Boeiers, Grundels etc. But ironically here a small but loyal catboat community can be found. It is the

catbootclub NL, their members meet 1-2 times a year. The skippers sail catboats of many different designers and often built by the owners themselves. One can find designs of Lyle C. Hess, Phil Bolger, Charles Wittholz and

John Benford, and they are probably the only types of theses designers that can be found throughout Europe. So their meetings make a rare occasion to see these unusual and very different boats in realtity and to see them in action.

One manufacturer for catboats in the Netherlands is Fa. Green Ocean Yachts.

"Novatus" from 1922 designed and built by Abeking & Rasmussen. Together with the "Krümel" they are the only two surviving Katkreuzer boats.

It took Jaap Kraayenhof seven years to build his beautiful

"Charlotte II" . She had been built entirely from recycled wood. It is a rare design from Lyle C. Hess in frisian waters.

> foto gallery on the building of Charlotte II.

One of the many "Square Box" type designs from Phil Bolger. "Twin Peaks" sails extremely well and is nicely built by

Peter de Boer. This type of catboat is rigged as cat-yawl and rarely seen in Europe.

Another design of Phil Bolger, who certainly was one of the most innovative boat designer in the USA. This is "Lizzy Bend" an interesting Chebacco type catboat, rigged as cat-yawl and sailed from Jan Doddema.

Probably the only catboat in Europe built with ferrocement is the "Lais" . It was built in 1979 by Ferrocem in Schiedam, NL. It is 17´Jay Benford design with fixed keel and sailed today by Jasper Felsch.  She also has a short bow sprit to allow for a 5,4m² foresail.

"Gooitske" a Charles Wittholz design, had been built on his own by the Dutch Oby Vossema in 1999. A nice and also very motivating description of the building phase had been published in the dutch magazine "Waterkampioen"  of 2001.


Italy is known for its fashion, designs and fascination for beauty. And italian boatbuilders do have a good sense for fine materials, classic lines and high quality standard. Reasons enough why also catboats found their enthusiasts in Italy.

One of the well known boat designers who also had designed catboats is Carlo Sciarrelli. He designed the 7,15m catboat "Chirone". Characteristical are the slightly tilted mast and the small round portholes in the cabin. It had been built at Girolamo Ippolito. Some of these types can be found in the gulf of Venice.

Aldo Gatti designed Difference a 23 ft GRP catboat, which became quite popular. He managed to keep the classic lines to the degree which is necessary while at the same time he transferred the creation of a new and modern catboat into design. Many innovative ideas for the interiour design had been incorporated and nicely realized in fine cherry wood. In the beginning this boat had been manufactured at Cantiere Cardani but since 2000 the production had been taken over by Cantiere Leopoldo Colombo. Besides Leopoldo Colombo manufactures also a cat-rigged Dinghy and a bigger 8,10m catboat.

This beautiful Fenwick Williams 18´design had been modified by Aldo Gatti and had been built by boatbuilders Leopoldo Colombo. Hull: mahogany on oak frames, teak deck. Interieur mahogany; "Nutshell" is sailed from Mauro Gonzaga